January, 2018, I’m getting knee deep into developing the game.  Paul Thayer from the Color Computer Community, who also happens to be the author of Timber Man, and other cool CoCo projects kindly donates to me a program in BASIC that allows me to design my space ships and objects, save the entire graphical screen as a BINary file that I can then load directly into the CoCo video memory, and use the built-in GET and PUT commands to create my “sprites” for the game.

A tech demo has been started which shows the random placement of spaceships on the screen, and the ability for my to move the player ship left and right with the joystick.  I originally placed 8 of the same spaceships on screen and animated them, but then updated the demo to show one of each of the 8 space ship designs on screen all at the same time and animated all 8 of them, along with player left/right movement. 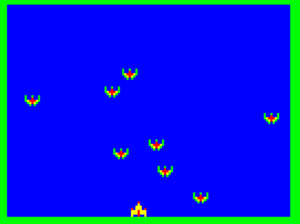 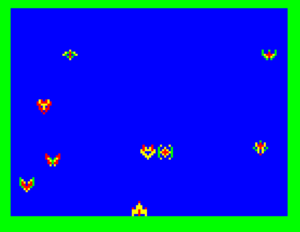 After this “ground breaking” work was completed, I decided I now needed fonts to be able to produce text on screen, including your score, high score, etc.  I had previously designed some fonts for the CoCo however those fonts were not idea for the low-resolution screen I am working in, so I had to re-design some fonts, in a 3×5 pixel matrix to look well and not “eat” up the entire screen.  The fonts were designed in an Excel spreadsheet, then translated by eye and hand into the BASIC “DRAW” command to be able to place them on screen, and a simple routine to render letters and numbers on the screen was written as a new “fonts demo” this routine now needs to be renumbered and merged into the main program so I can begin using it.

This was the last bit of progress completed in early January 2018, we’re now in early May, my schedule has hopefully freed up for me to continue work on this project, I’m hoping to have demos to show off later this year at VCF Midwest in September and Tandy Assembly in November, 2018.  I will hopefully have a brief YouTube video created showing of these latest tech demo including font rendering very soon, and then pick up the pieces and move forward with this project.