In the roughly 2 years Cosmic Aliens was circulating through bulletin board systems, it made it’s way across the US and at least to Canada, all this, without an internet!  I received at least one donation payment, that I can remember, and it was out-of-state, wish I kept any record of that, how cool would that have been?  For being an unknown programmer, and having only one, very cheesy and very simple (even for the time) game under my belt and out in the wild, at least three fairly impressive things happened!

In July of 1989, I received, in the old fashioned postal mail service, a package which contained a printed copy of a review for my game.  The Review was written by Patrick Grote, from St. Luios, MO, and he was an aspiring writer.  He was writing on-line reviews for national BBS networks and his reviews had made their way to Europe.

He wrote a review of Cosmic Aliens, and sent me a copy of the review for my feedback, which, in my complete ignorance, I completely never responded to.  I am currently in pursuit of Patrick, I hope through the power of the now Internet and social media, we may finally get to speak. 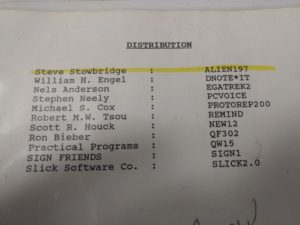 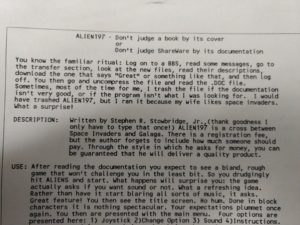 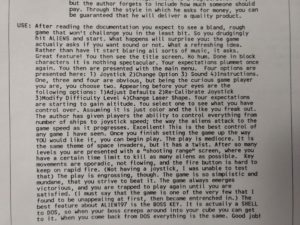 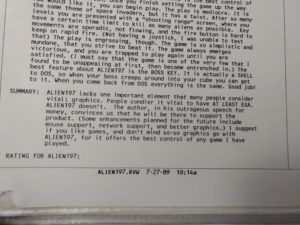 In September of 1989 I received a written letter, on very fancy letter head from a company called NINGA Software Corporate, from Alberta, Canada offering to potentially purchase the game for wide-spread distribution!  This was both exciting, and flattering, and again, in my ignorance, I completely ignored it, not even sending a “no thank you” response, hey I wasn’t used to being courted!  I wasn’t doing the game for the fame or fortune as much as I was for the fun of just making it, and I was a bit concerned about losing creative control or even rights/ownership over my own, and at the time, only public project, so I decided to keep it safe to myself. 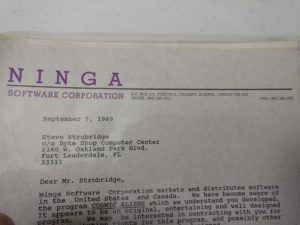 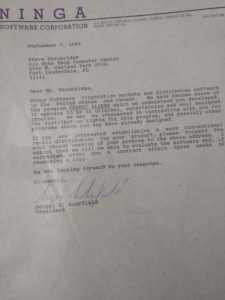 The third thing I remember, which to me, was the most rewarding of all, was being visited by a member of the United States Armed Forces.  I can’t remember the guy’s name, or what branch of the military he was with, let’s assume the Army, but, he had contacted me at the local computer store I was working at during the time of this version’s distribution, a small private chain of stores in South Florida, called The Byte Shop.  I had the address and phone number of my local store as the contact address in the program.

This person called the store and asked to speak to me.  He told me he was a fan of the game, and that he and his army buddies enjoyed playing it at their military base.  So when he was in Florida, he came to visit me at the Byte Shop to meet me in person.  I was so flattered, honored and humbled by this.

Still having the source code at that time, I gave him a custom compiled copy, being a one-of-a-kind personalized version for him, and his unit.  It was re-compiled and put on a floppy for him, I don’t recall ever hearing anything again, and it would be very cool, and even more rare to find that particular version out in the wild.

So these were some of the “big things” that happened giving me the 15 minutes of fame everyone eventually gets, in-between these big moments, there were many satisfying other ones having my local friends play the game, and actually enjoy playing it, and even giving me suggestions on things to add and change.