During the 80’s my love for playing with the Color Computer and programming in the BASIC led me to believe I wanted to become a computer programming for a living.  I went to a local college that specialized in computer science, and thought, at that time, I was going to learn the assembly language.  Assembly is the native language of the computer, and most of the very fast, commercial quality arcade and action games are written in assembly, which allowed them to run very fast.  I never learned assembly as a kid, but though it would be taught in college. I was disappointed to learn that not only were they not teaching assembly, but the things they were teaching were of no interest to me.  Most of the school was running on green screen IBM clones with floppy drives, I had already upgraded to a Tandy 1000 MS-DOS clone system with a color RGB monitor and hard drive, so the entire experience felt like a big let-down to me, and my hopes and dreams of becoming a programmer (I actually wanted to be a professional video game designer) quickly faded into oblivion and I branched out into other areas of computer systems and support which I continue to do for a living to this day. 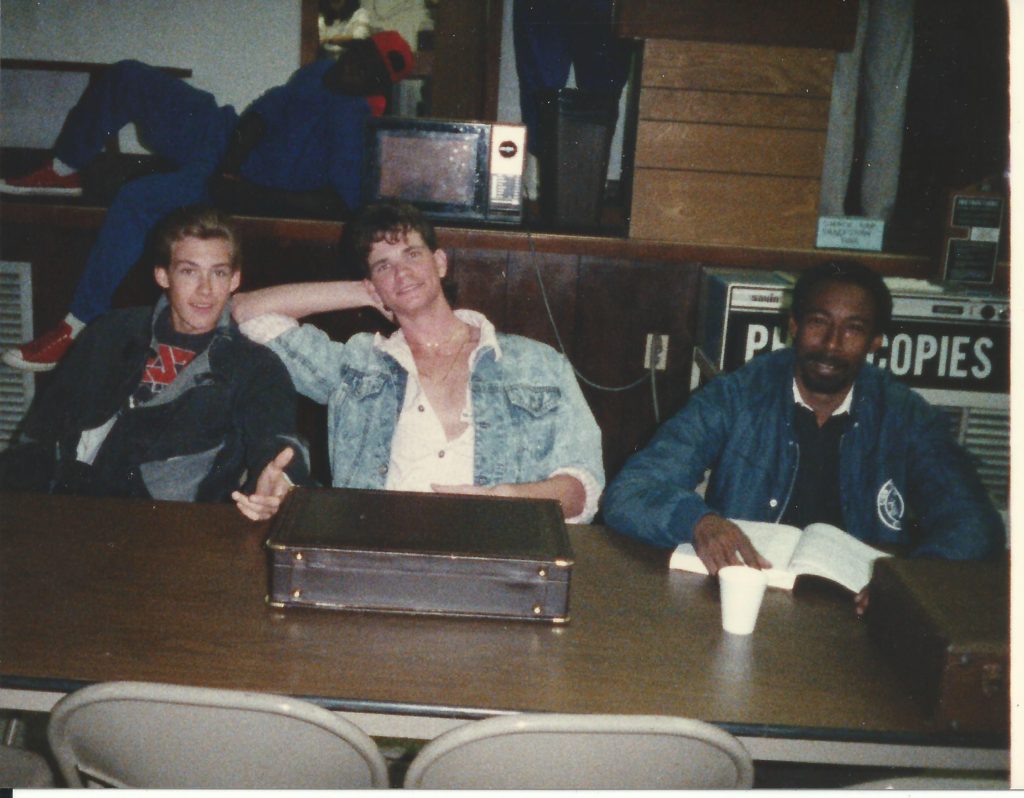 College with some buds, I’m in the middle

The BASIC language would still be a part of my life as a hobby throughout the 90’s.  The Microsoft Extended Color BASIC of my CoCo was basically the same language Microsoft would produce for the IBM PC and family of clones and compatibles.  BASICA on the IBM, and GW-BASIC on MS-DOS based systems were the same language, with more capabilities.  Somewhere along the way, I got my hands on “Quick Basic” also by Microsoft.  QBASIC offered a few benefits; first, it offered a full screen editor, unlike the line number method of previous versions.  Secondly, it was a compiler, so anything I wrote could be compiled into machine language (assembly) and would run as an executable file for MS-DOS based systems.

Cosmic Aliens was written in QBASIC 3.0 in 1988 in my programming class in college.   I would bring the software back and forth on floppy disks between school and home, most of the major work was done at home.  QBASIC allowed the game to run pretty quickly, so I didn’t need to learn assembly, I could stick with the comfortable pair of jeans that was BASIC, and write some pretty cool stuff that ran pretty quickly.  Between being compiled, and running on a faster computer, the game was very playable.

Before Al Gore invented the internet, local bulletin board systems, or BBS’s as they were known were a popular way to get “on-line” converse in message board with others, and upload and download software.  The idea of freeware, shareware, and public domain software was very popular.  Many people wrote programs and distributed them for free.  Some companies offered trial versions of their products, and others would release a version on the honor system, hoping some people would make donations to their project.  This was a popular theme in distributing software, so, to look legitimate, I would put in the “plea for payment” in the program, but I literally didn’t care if anybody did, it was just the way things were back then.  If memory serves, I think I did get at least one check for about $25 from someone, if I had the foresight, I should have at least photographed the check, oh well…

I distributed the software through a handful of BBS in South Florida, and actually got good feed back both from direct friends who played it, along with on-line friends, who I didn’t know in person, but would send me messages about suggestions for the game.  The game would evolve over time, as my programming skills increased and as suggestions were made.  Even though there was no internet, there were networks of Bulletin Board Systems that would cross-pollinate not only the discussions, but the software libraries as well, so my program made it’s way out a a world larger than South Florida, how big, and how far, I’ll never fully know, but bigger than I originally imagined.